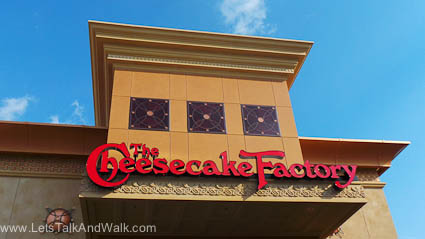 The Cheesecake Factory is coming to Knoxville! In fact, opening day is sometime this week. Some reports say Monday, others Tuesday. I was very fortunate to win a spot at their training dinner on Friday night through Twitter. I wanted to share some pictures of the restaurant and food with you, along with my thoughts of the food and service.

In full disclosure, this was a training meal and we didn’t pay a dime for food. We did tip our server, although that was completely optional. We would have been spending money eating out somewhere, so we wanted to show our appreciation. Our server was Jamie R. and she was fabulous. Friendly, attentive, knew the menu, and handled all of our requests. The Cheesecake Factory was not giving away alcohol because this is illegal in the state of Tennessee. Each patron was allowed to purchase a drink ticket through a $1 donation to Second Harvest. We definitely took them up on that great offer.

Upon arrival, we checked in outside to let them know we were there. I told the gentleman I won the Twitter contest and he was quite excited. We were still waiting on some of our party, so we stayed outside. Once we were all there (at 6:30 our reserved time), we were ushered into the foyer. There we were informed of the “rules” of the evening. I will get to some of those later.

We were then instructed to go to the hostess station to “check-in.” I told the hostess my last name and that we had won the Twitter contest. She went – “what? what’s Twitter?” Since there were multiple groups entering at the same time, she left us til last because she didn’t know what to do with us. Finally we were helped and given a pager to wait. And wait we did. For 45 minutes. We actually could have been sat outside almost immediately, but it was so hot and humid that we decided to wait for an indoor table. I felt communication between the outside check in and inside check-in could have been better. What threw the hostess for a loop was that invited guests had a paper ticket to hand her, but the Twitter winners did not.

While you are waiting, you can look at these BEAUTIFUL cheesecakes that they are known for. Trust me – come hungry because you will want dessert. You can also get their food to go and we noticed many of the mall employees taking advantage of that fact along with some of Knoxville’s firefighters.

The restaurant itself is gorgeous. They did a beautiful job. It is also now the only sit down restaurant at West Town Mall. It is attached to the mall, but there is no entrance from the mall. Like I mentioned above, they have outdoor seating, which is beautiful and might be fun during the spring or fall, but not so much the summer heat. 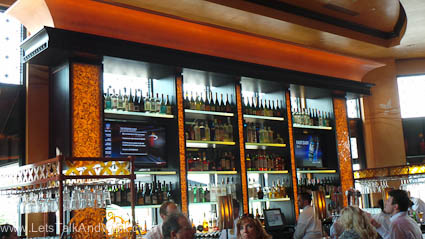 They have a full bar and it gets great natural light. You probably don’t care about the natural light, but it was great for taking pictures. 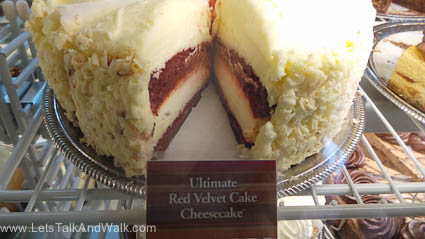 See the above Ultimate Red Velvet Cake Cheesecake? You will see that again later in this review.

So, let me explain their “rules.” All the menus given to each person were different for drinks AND entrees. They were trying to get a great cross-section of their menu ordered and fixed to help the chefs and bartenders. And I understand that – to a degree. However, it got difficult in trying to find something you liked/wanted at times. The drink menus were full of wines and beers – which was okay for hubby and J, but A and I like “girlie” drinks. Luckily we were able to get hubby a beer, J a glass of wine, A some Typhoon Punch, and me a Mojito. The drinks were excellent, but pricey. You will see how much everything would have cost at the end of this review.

Onto appetizers. Each table was allowed to order one appetizer. Again, it was a short menu to choose from. Being that they have a HUGE starter plate/appetizer menu and none of the items we wanted to try were on it, kind of disappointing. But again, it was free food and you can’t really complain about that. Hubby and I had hoped there was an ahi tuna appetizer on our menu, but no such luck. 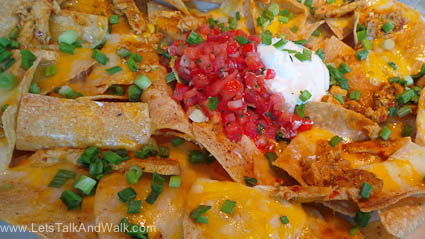 We wound up getting the Spicy Nachos with Chicken. It was pretty good and they handled our special request – guacamole and jalapeÃ±os on the side with ease. Definitely a HUGE plate that was perfect to share amongst the four of us. 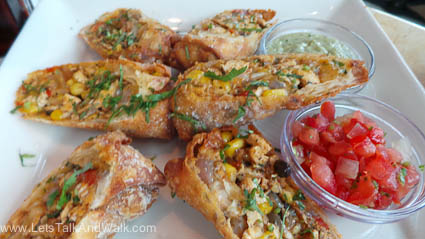 A nice touch was that the manager brought us these Tex Mex Egg Rolls for our patience in waiting. Kind of ironic, free food to wait on free food. The egg rolls were delicious. Again, there were six pieces on the plate – so plenty to share. 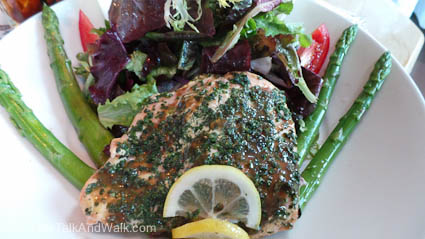 The entrees took quite a bit of menu switching. Thankfully I think we all got something we liked/wanted. Hubby got the Herb Crusted Salmon Salad. He said the salmon was the best he has had in Knoxville, outside of what he cooks himself. I tried a bit and was equally impressed, although I didn’t realize it was chilled salmon. It was a BEAUTIFUL presented salad and I had fun taking its picture. 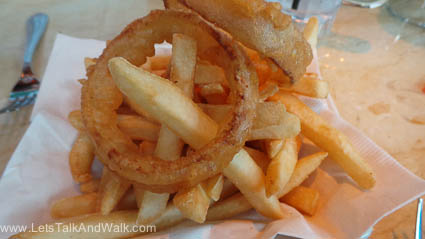 Thanks to J, I was able to try the filet, which was what I had wanted to try all along. It comes served with french fries and onion rings, which is a little weird for filet. The fries were cold so I only ate about 5. The onion rings (2) were pretty good. If I had been paying, I might have returned the fries, but I really just wanted to filet and I knew dessert was still to come. 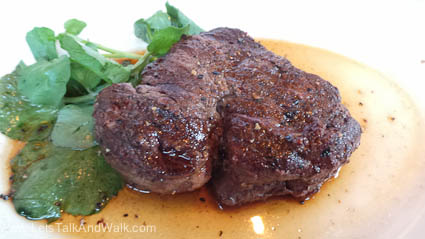 The filet was cooked perfectly (medium rare), but isn’t like a filet from Ruth’s Chris. It was a good size filet – maybe 6-8 ounces. It wasn’t overly seasoned, probably could have used some more. I will say I love blue cheese with steak. They brought me some of their blue cheese dressing and it was delicious. Crammed full of blue cheese chunks. 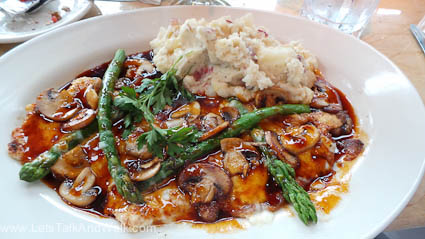 A was able to get her favorite dish, Chicken Madeira. She loved it. This is her go-to dish at The Cheesecake Factory and she had plenty to take home with her. 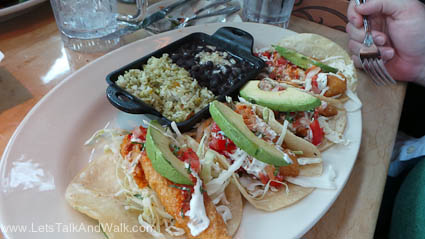 J ordered the Fish Tacos and enjoyed them. Be sure and keep reading and you will see why he actually didn’t expect to get them. 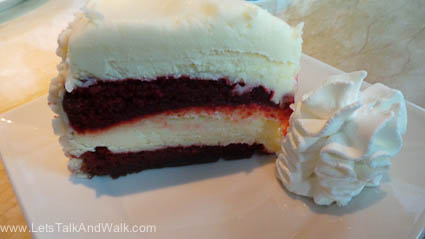 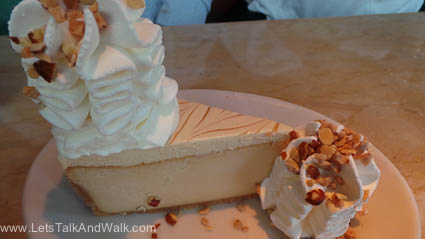 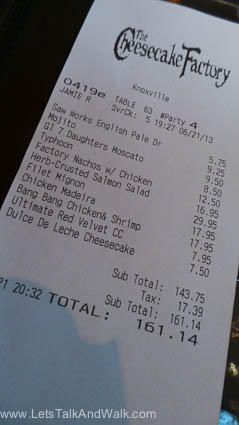 Now for some sticker shock – above would have been the bill for the 4 of us – $161.14 BEFORE tip. If you have been paying attention, you will notice Bang Bang Chicken and Shrimp is listed, but not the Fish Tacos (which actually are $13.95). There was a little confusion in the kitchen. After J placed his order for Fish Tacos, a manager came out and informed him that they had run out of tortillas. So, he choose a different item – Bang Bang Chicken and Shrimp. Imagine our surprise when he was delivered the Fish Tacos. So that’s why the “bill” is slightly off.
While the food itself is good, I don’t think it is worth the sticker price. Desserts are another story – they are worth every penny. I would definitely consider this a special occasion place. If you are looking for somewhere to go for dessert – this is your place. The drinks were good, but at $9.25 for a Mojito, I won’t be drinking there. Hubby’s beer, which is brewed in Knoxville, would have been $5.25 for a pint. Again, pricey compared to other comparable restaurants in town.

UPDATED: Here is a link to the Cheesecake Factory Knoxville takeout menu that shows pricing.

From what we were told, they will not be taking reservations or call ahead seating for the near future after opening. Be prepared for a long wait. Knoxville loves to try new places and I suspect they will be packed for at least 2-3 months. You might try “off” times, like 2 or 3 in the afternoon, right when they open, or an hour before they close.
A huge thanks to The Cheesecake Factory for holding a Twitter contest. We really enjoyed the night out and getting to be one of the first to try the new place.

If you head to Knoxville’s Cheesecake Factory, be sure and come back and let me know what you think!

Whoa! That is some expensive food! I’ve never eaten at a Cheesecake Factory, mostly because of the calorie counts of their food. Plus, since we don’t have one here, it would mean I was traveling and would have no place to take leftovers. Now, I can see that cost will be another reason to skip them, especially, if it is just average.
Thanks for the review!

I do love the Cheesecake Factory – – their grilled tuna sandwich is the best ever, and I have always shared it with someone. But truly the cheesecake is worth going there for.
Thanks for the knowledge that you can’t get there from inside the mall. I would have gone to the mall to get in.

I love cheesecake factory desserts. B and I always go and get a slice of cheesecake when we’re traveling and take it back to the hotel to eat in bed. It’s like our routine. I agree, the prices on the meals are high. I tend to order something small and pick off his plate if we’re going to have a meal there.

Their desserts are amazing! Best cheesecake ever and so many different varieties.

My husband and I celebrated our 12th wedding anniversary yesterday, and I’ve been wanting to try the Cheesecake Factory. So, that’s where he took me for dinner. My husband likes to have a beer with his dinner, so he asked our server if they had Becks? The server said of course, and my husband said “I’ll have one then” I ordered a margarita. We ordered an appetizer, dessert, the whole 9 yards. The bill was $78 for the 2 of us. No big deal, we were celebrating, we were treating ourselves, although we do every time we go out to… Read more »

Lori – First of all, happy 12th anniversary to you and your hubby!!! Congrats. I am so sorry that your anniversary dinner was such a disaster. Honestly, I think you should write the corporate offices of The Cheesecake Factory. That kind of behavior is unacceptable from restaurant managers.

Welcome! My name is Glenneth and I live in beautiful East Tennessee. I wear many hats: CEO of The Visibility Method, SEO & Google Ads Expert, content creator and more. I love technology, social media, and weight lifting. My favorite place to hang out is the hammock in my backyard. My favorite colors are pink and orange. My favorite team is the Vols. And I LOVE to get email so please drop me a note and say hi!

Enroll in The Visible Ads Method